“Whatever the result is, this referendum has changed Ireland forever”

Friday May 25th, the people of Ireland will take to the polls to decide if the 8ththth Amendment should be removed from the constitution. This amendment states: “The State acknowledges the right to life of the unborn and, with due regard to the equal right to life of the mother, guarantees in its laws to respect, and, as far as practicable, by its laws to defend and vindicate that right.” In a previous article I outlined the ways in which the 8thth amendment currently affects pregnant people in Ireland.

Currently a pregnant cow can receive better healthcare in Ireland than a woman seeking abortion. Irish farmers know that not all pregnancies go according to plan. If a cow becomes pregnant when they are too young, or if complications occur, farmers prioritise the life of the cow and will terminate the pregnancy. If the cow becomes ill, they will receive the best veterinary treatment, regardless whether they are pregnant or not. In fact, if farmers would allow cows to continue to suffer with inviable pregnancies, it would be considered animal abuse. Farmers have been raising their voices in support of a Yes vote in recent weeks.

On Facebook a mother shared the story of her 19 year old son, who told her the boys in his class were all voting No because “the women are getting out of control”. This is in line with online polls showing young men planning to vote No as a reaction to the Me Too movement and feminism. Similarly, tone policing of the Yes campaigners leads to statements like “I was going to vote Yes, but not if they keep shoving it down my neck.”. It is incomprehensible to me that anyone would choose how to vote based on anything other than the question at hand.

“If farmers would allow cows to continue to suffer with inviable pregnancies, it would be considered animal abuse.”

Speaking of the tone of the debate, the No side have come out with statements that are mind-blowing. At the launch of the Save the Eight campaign a woman explained to an audience of about 400 people that the act of giving birth “heals the effect of rape”. They campaign against what they call “social abortion”, seemingly framing abortion as something to be entered into lightly on a Saturday night. They suggest that in 15 years time our school classrooms will be empty. The No side imply that if the 8thth amendment is passed, people will be forced to have abortions and no more babies will be born in Ireland.

They make debate impossible by refusing to answer questions put to them in television interviews. They are repeatedly asked to answer questions such as “Do you agree that a 14 year old pregnant rape victim should have to travel to access the health care she needs?” They change the subject, repeating seemingly rehearsed phases about innocent healthy babies being murdered.

On the other side, there has been great beauty in this campaign. The love and solidarity between campaigners for Yes has been inspirational. Individuals have abandoned their everyday lives to canvass door to door, to raise funds, to hang posters. Online groups of women have been supporting each other and holding each other together during this campaign spanning years. I have rarely come across a situation where random strangers take such good care of each other.

Another wonderful action is that of the group Radical Queers Resist (RQR), covering graphic images of unborn foetuses displayed by the Irish Centre for Bio-Ethical Reform (ICBR). The ICBR targets maternity hospitals, LGBTQ+ venues and main shopping streets, causing major distress to children and people accessing pregnancy care. As soon as Twitter users let RQR know that the ICBR have set up banners in a particular location, they launch a call to mobilise volunteers to the location to cover the banners with rainbow flags and sheets. It is illegal to display distressing, offensive images under Section 7 of the 94 Public Order Act. However it has proven very difficult to get police support with complaints of such displays. In a bizarre move, the ICBR has released a video titled “The cover up” highlighting the work of RQR. Intended to show that they are being silenced, the video instead serves as a heartening display of people power.

It is interesting to look at how unborn babies are handled by the church and state in Ireland. The church will not baptise a miscarriage or stillborn baby. They are denied a funeral and may not be buried in church graveyards. If a pregnancy ends in miscarriage in the first 6 months it is not possible to register the birth with the state. If a baby is stillborn after passing the 24th week of pregnancy (or weighs more than 500g) you can apply to the state for a Stillborn Certificate. However it is not possible to obtain a birth certificate.

Most people agree it is inhumane to force a teenage rape victim to travel abroad to access a termination. Most people know in their heart that it is torturous to force a person to continue a pregnancy knowing their baby will not survive the birth. A ‘No’ vote denies these people compassionate healthcare in their home country. This is our chance to right the wrong that was done when the 8th was written into the constitution 35 years ago.

A ‘No’ vote will not stop Irish abortions taking place, it means that they will continue to take place abroad. A ‘No’ vote means that Ireland continues to condemn vulnerable citizens to travel abroad to access healthcare under a veil of shame and secrecy.

“A ‘No’ vote will not stop Irish abortions taking place, it means that they will continue to take place abroad.”

Today and every day in Ireland, nine to twelve pregnant people travel abroad to access abortion services. Additionally, three to five women use illegal pills for a termination in their home, without medical support and putting themselves in potential danger.

I believe Ireland is better than that. I believe in the compassion of the Irish people. I believe we have grown away from the fear and shame historically imposed by the church. I believe in trusting women. Unborn babies to not need to be protected by the constitution, the best protection for an unborn baby is their mother. 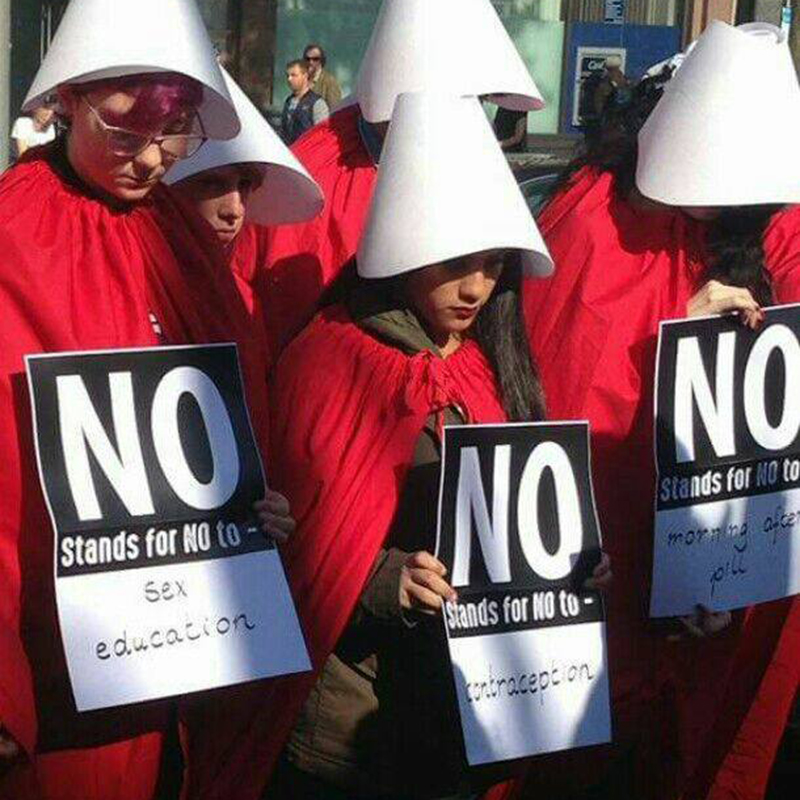 A protest against No voters in Dublin. The protesters wore the costumes of The Handmaid’s Tale, the famous dystopian novel by Margaret Atwood that was adapted into a television series. Pic by Sandra Fay

This referendum is about more than access to abortion. The result on Saturday will send a strong message. It is a statement of how we see women, how we value their lives and how we respect and trust them. Whatever the result is on Saturday, this referendum has changed Ireland forever. Women have shaken off the shame and silence and we will never go back. Recently a No campaigner referred to the young women on the Yes side as “obstreperous”. I had to look it up, it means “loud and difficult to control”. Well yes, yes we are.

If Ireland votes Yes to repeal the 8thth amendment and remove it from the constitution on Friday, it will be replaced by legislation based on the following proposal:

Allowance for abortion in the first 12 weeks of pregnancy:

Following the certification of two medical professionals (one obstetrician and one appropriate medical practitioner), it will be lawful to carry out a termination up to the moment the foetus has reached viability in the following cases:

Following the certification of two medical professionals (one obstetrician and one appropriate medical practitioner), it will be lawful to carry out a termination throughout the entire pregnancy in the following cases: