It seems that Ireland hates women

This morning a friend sent me a photo of a Belgian newspaper article and I cried. I have been involved in the Irish women’s rights struggle for years, but seeing it covered in a Belgian newspaper, in the language of my adopted country, hit me in a way I didn’t expect. This is for everyone who thinks Ireland is a happy modern European country, full of Guinness and coloured green.

Worldwide, only Ireland and the Philippines have provisions which equate the right to life of the unborn with that of the mother. 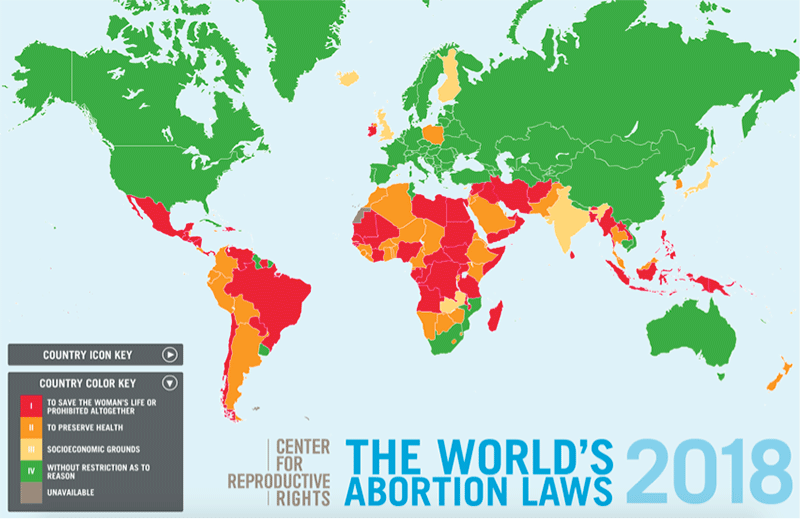 Today Ireland has one of the most restrictive laws in the whole world in relation to abortion. Abortion was illegal in Ireland in all cases until 1992. That year the Supreme Court declared that, under the 8th amendment, abortion was legal in the case of threat to the life of the mother. However, abortion remained a criminal offence and the legal implications were so unclear that doctors were unlikely to carry out such a procedure.

“Every day 13 Irish women travel to the UK to access abortion services. They travel home, bleeding and alone, on planes and ferries.”

The Protection of Life During Pregnancy Act 2013 brought some clarity, however, criteria to qualify for abortion are very restrictive. The 2013 change came about partly in response to the avoidable death of Savita Halappanavar caused by the restrictive abortion laws. Mrs Halappanavar was 17 weeks pregnant in October 2012 when she was admitted to hospital suffering a miscarriage. In the last seven days of her life she repeatedly requested an abortion for her dying baby. She was told “this is a Catholic country” and her request was denied based on the fact that the foetus still had a heartbeat. By the time her miscarriage came to a natural end four days later and the foetus was removed it was too late to save the mothers life.

It is important to realise that the 8th amendment does not prevent abortion. Every day 13 Irish women travel to the UK to access abortion services. That is over 5000 women per year who leave their support network and home to undergo a medical procedure that their country denies them. In such a time-sensitive situation, those women face weeks of delay while saving to afford the trip. They book their procedure using fake UK addresses for fear of prosecution once back home. They travel home, bleeding and alone, on planes and ferries, 13 every day. Women who develop complications are often too afraid to go to the hospital, with serious consequences. Many order abortion pills on the internet. Often these pills are confiscated by customs, leaving pregnant people desperately considering more drastic solutions. This helpful guide to abortion while living in Ireland, gives you an idea of what is involved. The 8th amendment does not prevent abortion, it only prevents safe abortion.

“The 8th amendment does not prevent abortion, it only prevents safe abortion.”

In September 1983 the 8th amendment was approved by referendum. This means that anyone under the age of 52 today did not vote on this issue. The anti-choice campaign would like you to believe that this referendum is about selfish women choosing to murder babies. They frame it as abortions for everyone, even suggested that if abortion would be legal, that no more babies would be born in Ireland. They stand on the main street of every town, outside schools and hospitals, with posters showing disturbing images of third trimester babies torn apart. Under the Public order act it is illegal to display such images. They do not represent the reality of abortion, but that does not stop them.

They recently ran a campaign featuring a man who claimed to be a Registered nurse and psychiatric nurse. He claimed he had witnessed unethical abortion practices in UK hospital theatres, including seeing “beakers of babies” left on shelves for days following abortions. Thanks to the hard work of @NursepollyRgn (an actual nurse), we now know the truth. Nurse Polly carried out an investigation that proved that his nursing certificate and ID were falsified. This man fled to the UK in the 1990s to avoid criminal charges. He was never a nurse and was not present in hospital theatres. He worked in a hospital as a porter for 8 months in 2000 and his employment then ceased. This gives you a glimpse of how the anti-choice campaign is being run. They use lies to try distract you from the truth. 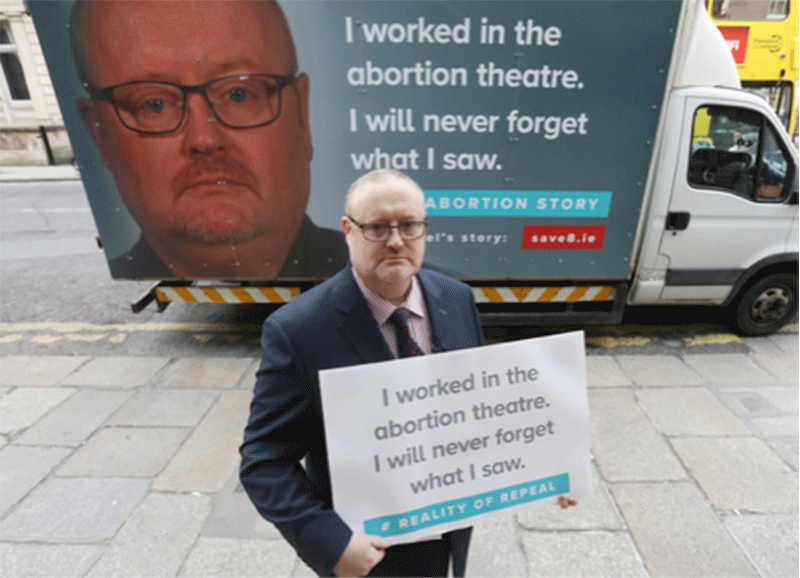 Save the 8th campaign said that it stood by the adverts despite discovering that Noel Pattern was not honest in his testimony. Source: www.broadsheet.ie

The demographics of the anti-choice movement; men, old women and religious fanatics. This is not the demographic affected by this law. They march with rosary beads, statues of Virgin Mother Mary and placards shouting about murder. The Catholic church has been detrimental for women and children in Ireland. From the paedophile priests to the torture of unmarried mothers, the babies sold to medical trails, starved to death or dumped in septic pits. The Catholic church seems to not love women* and not love children.

Stills from video taken at the anti-choice ‘Rally for life’ 10 March 2018 Dublin.

This is the same movement that campaigned against the use of contraception. Birth control was not readily available in Ireland until 1992. In 1978 contraception was available for “family planning or for adequate medical reasons” and only on doctor’s prescription. This means, up until 26 years ago, if you were married, you had to ask your doctor for a prescription for a condom. If you were not married, you would not get the prescription. Prior to 1978, it was forbidden to sell or advertise contraception in Ireland. This group also campaigned against divorce, which remained illegal in Ireland until 1996.

“The anti-choice movement uses the slogan ‘Love both’ but do not seem concerned with children once they are born.”

The anti-choice movement uses the slogan ‘Love both’ but do not seem concerned with children once they are born. Of the almost 10,000 people homeless across Ireland, 3,755 of them are children. Almost 500 of those children became homeless in February 2018. If they cared about children, they would be out on the street protesting that. The anti-choice people seem to not love women and not love children.

So, what does the 8th amendment mean?

The 8th amendment of the Irish constitution does not only affect pregnant people seeking abortion. It has tendrils in the medical care of every woman in Ireland. Here are a few of many examples:

What can you do to help?

If you have a vote in this referendum, I urge you to use it. The question is not if you personally approve of abortion, the question is if you believe that women should have the right to choose. If you are anti-abortion, repealing the 8th will have no impact on you, you will never have to get an abortion. I have heard a lot of men saying that they wish to leave it up to women, and so will not be voting. I can assure you that the anti-choice campaigners will not afford us the same courtesy. Voting Yes to repeal the 8th amendment is the only way to give women a choice. As I have been living outside Ireland for longer than 18 months, I have lost my right to vote (I am however auctioning a painting with entire sale price going to Together For Yes – who are coordinating the actions of several pro choice organisations). Please don’t stay at home on the day.

If you are undecided, I suggest going to the fb page ‘In Her Shoes – Women Of The Eighth’ and reading the statements of women who have been affected by the 8th amendment. If you are planning to vote Yes, talk to your friends and family, ensure they have enough information to make an informed decision. Get vocal online, this requires a lot of emotional labour, and you will cry, but you are not alone.

I believe that women should have the right to choose. I hope that right will finally become a reality in Ireland, too. So, does Ireland hate women? On the 25th of May we will have the answer.

*In this article I use the word ‘woman’ as default. However we should be aware that several non-binary people and trans men are equally affected by this legislation.