As an Irish native living in Belgium, Charlie editor Hilary is concerned with Ireland’s current affairs. She frequently writes about how Irish girls and women suffer because of Ireland’s strict abortion laws.

Let me tell you the story of a 28 year old man called Tim. Tim supports the 8th amendment which was voted into Irish Constitution by referendum in 1983. The amendment states: ‘The states acknowledges the right to life of the unborn and, with due regard to the equal right to life of the mother, guarantees in its laws to respect, and as far as practicable, by its laws to defend and vindicate that right.’ No one of childbearing age ever voted on this amendment that has such drastic influence on their lives. Two years ago I wrote a overview of abortion in Ireland.

In addition to denying access to abortion, the 8th amendment of the Irish constitution also means the following:

Tim believes that pregnant people should not have autonomy over their bodies. On the topic of contraception, Tim states he “would advise people not to go down that route”. In a case of a father who wished to turn off life support machines keeping his dead, pregnant wife ‘alive’, Tim stated that “That’s a father who’s stepping away from his duty to protect his own child“. Tim spends his free time standing in public places with posters showing dead foetuses. Tim helps out at a crisis pregnancy agency. This agency communicates that abortion causes breast cancer and can increase a woman’s chances of losing her reproductive organs. They say that contraception was dangerous and women could “die” from having sex.

People have told me not to give Tim the attention he so badly desires, but I believe it is important to highlight this to the world. We need to call out his lies and hope that we are heard by people in need of an abortion. We are the media. We have the power to instigate change. Last week, backlash on twitter caused a hotel to cancel an anti-choice event they were hosting. The topic of the event, the links between abortion and cancer. Spoiler: there are none.

“Tim’s glorified diet is an insult to the people travelling to England to access abortion services.”

So Tim has decided to go on a hunger strike. Using his advocacy over his body to choose to do a hunger strike is painfully ironic considering he is campaigning to deny pregnant people advocacy over their bodies. Tim is demanding that the government watch a video of an abortion before they make any decisions about the 8th amendment. There has been no official response, but some politicians have stated that they have no problem to watch such a video.

This action may seem like a man standing up for his convictions, until you discover the details of his so-called hunger strike. He has stated that he will not refuse food to the point of death. This is an issue that has cost many lives, but Tim values his life above all. His ‘hunger strike’ begins at 10h each day. He is drinking water throughout the day. Every evening at 19h he goes to stay at a friends house because; “I don’t think it’s worth picking up the cold and flus that you can out in the open air“. Many people have lost their lives due to the 8th amendment, but Tim doesn’t think it is worth catching a cold for. Ireland has a painful history of hunger strikes. Tim’s glorified diet is an insult to actual hunger strikers who died not so long ago on our little island. It is an insult to the people travelling to England to access abortion services. They are required to fast from the night before their procedure. The ‘hunger strike’ he is preforming is equivalent to what 12 people per day go through on their journey to access abortion in England.

You can hear Tim explaining his ideas in several radio interviews in this twitter thread.

Seems @TimJacksonInd hasn't grasped the concept of a hunger strike.

There is a good side to every story. Inspired by Tim’s ‘diet’ hundreds of Irish people have donated the price of their lunch to the Abortion Rights Campaign Free-Safe-Legal. They have received more than 3000 euro in a couple of days.

On Saturday the people of Ireland will take to the streets for the 6th annual March For Choice in Dublin.

This Thursday there is a solidarity march taking place in Brussels. 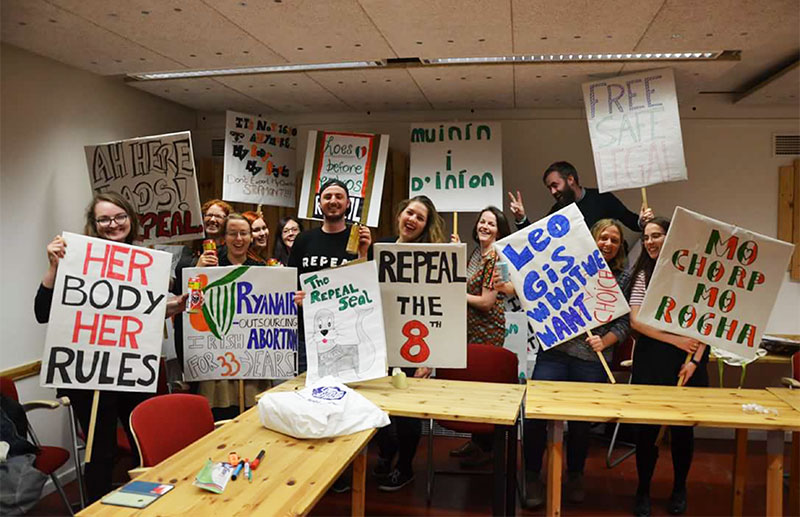 The organizers of the solidarity march in Brussels are getting ready.

Remember, we are the media, we have the power. Speak with your feet. Show the world that you believe in basic human rights for the women of Ireland.

Related article: How Ireland treats a pregnant 14-year-old in 2016