Anna (25) works as a project manager on gender equality and diversity for a think tank in Brussels. In her spare time, she makes and sells vulva embroideries under the name “Le Médaillon de ma Mie”. What started out as a joke, has now turned into a feminist statement. “There are so many different shapes and colours of vulvas, we shouldn’t always see the same ones.” Photos: Sara Stragier

“I made my first vulva embroidery a year and a half ago. I was joking around with my girlfriend and made one to decorate my bedroom. Some friends noticed it hanging on the wall and asked if it was a vagina. I told them it was actually a vulva, and we started talking about the anatomy of genitalia. That made me realize these embroideries could be an interesting tool to spark a conversation about bodies, social pressure and sexuality. And that’s when I got the idea to do something more with it.”

“We don’t have to make it a fetish, but it shouldn’t be taboo either.”

“Now I see my art as an introduction to those subjects. I have quite a lot to say but I don’t always know how to express it, my art helps me do that. This is a way for me to show that little things that happen to our bodies are normal. Periods, PMS, stretchmarks, fatness, bodily changes… We don’t have to be ashamed of any of it. All of that is completely normal. I just want us to be neutral about our bodies. You don’t have to love your vulva, but it’s important not to be ashamed of it. We don’t have to make it a fetish, but it shouldn’t be taboo either.”

“I have only made one vulva that was kind of realistic. A lot of people like that one but it’s actually my least favourite. It’s too pink for me, too stereotypically “girly”. Someone recently told me they like that one best because it’s the real colour of our skin. I said “maybe for white or light skinned people, but not for most people.” There are so many different shapes and colours of vulvas, we shouldn’t always see the same ones. That’s the reason I use a lot of bright colours and unrealistic shapes. I want to show that there is such a wide variation of colours and shapes in vulvas that it doesn’t matter if it’s not real. You can still see what it represents. And the bright colours give it an optimistic attitude. That’s important to me because we are never taught to have a positive attitude towards our privates. I want that to change.”

“It took time to unlearn the attitude I had towards my body, but it was worth it.”

“I do understand it is difficult to unlearn a negative attitude towards your own body. I grew up in France. When I moved to Brussels two years ago, my mindset changed so much. I feel less pressure here, less condescendence. The first year I was here, I started feeling better in my skin. I’m fat and I don’t feel like that’s a problem. I feel beautiful. I didn’t notice how much my point of view had changed until I went back home and people commented on my weight. I just thought: I don’t care anymore. It took time to unlearn the attitude I had towards my body, but it was worth it. Don’t get me wrong, I am still in the process of accepting it, and I guess that will never be totally over.” 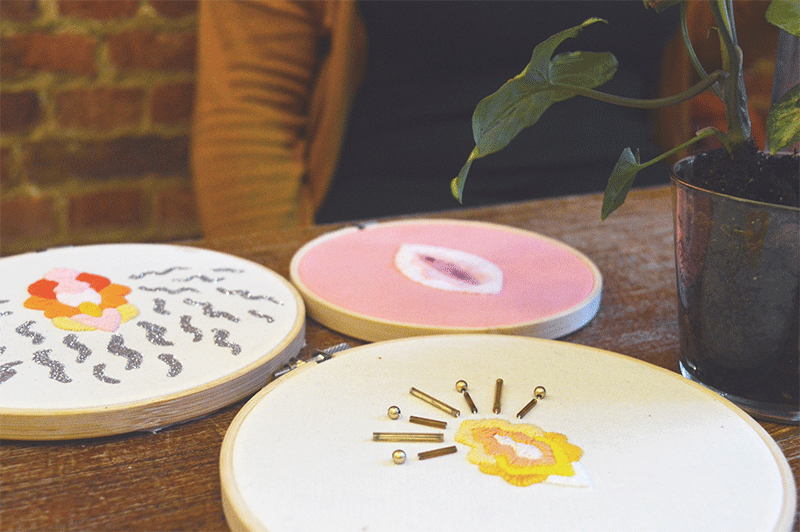 “We all have to do that in some ways. We all have to deconstruct what we were taught. I remember one time when I was studying in Prague, a Finnish friend and I went to a swimming pool. Afterwards she took off her swimsuit to take a shower. I couldn’t do that, I tried to wash myself over my swimsuit, because I didn’t dare to go naked – you never do that in France. But I was the one being ridiculous. I was the only person who wasn’t naked. So the second time, I took my top off and the third time I went naked. And guess what? It was fine. Nothing happened, no one stared at me.”

“That’s also what I mean when I say I want us to be neutral about vulvas. It’s important to realize that nudity doesn’t have to be sexual. People are afraid of women being naked. The Instagram and Facebook censorship on female nipples shows that. But it’s not really about nudity, it’s about controlling women’s bodies. You see that in the whole burkini debate we had in France. There was a police officer ordering a woman to take her burkini off. So either women are too naked or not naked enough. It’s all about controlling our bodies and that needs to stop because it’s absolutely ridiculous. ”

“Some days you have the energy to do something, to respond, to explain, to be the professor. And some days, you don’t.”

“Most of the time, I really want to speak up about feminist issues because I want to show that it shouldn’t be a taboo. But I hang out with specific people – I have my LGBTQ friends and my open-minded co-workers – and I know they’ll all be okay with my artwork and what’s behind it. My aunt even has one of my embroideries hanging up in the living room, for everyone to see. But when I talk to people who I know have a different opinion, I sometimes avoid the subject. Some days you have the energy to do something, to respond, to explain, to be the professor. And some days, you don’t. And that’s okay. I’m not a professor. You want information on feminism? Google it.” 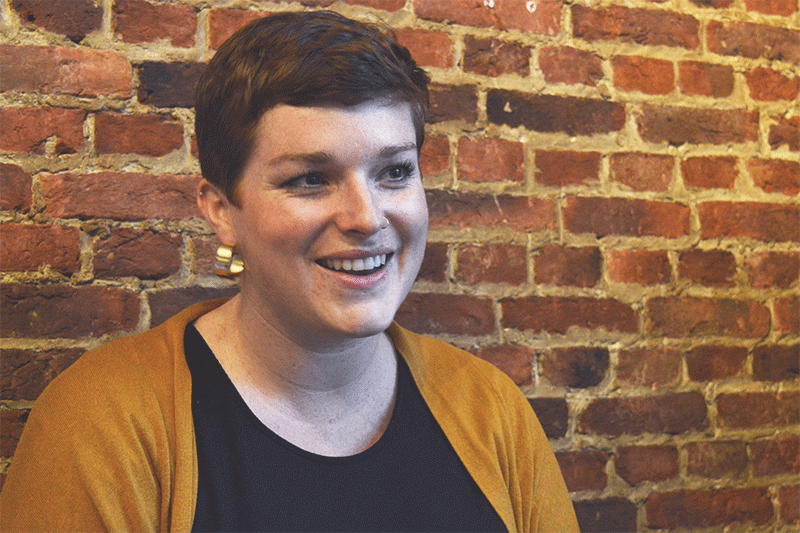 “I am positive about the feminist future. I feel like we’re at a turning point, at least for people my age. Even young women and girls who don’t call themselves feminists, don’t shut up. They have the guts to express themselves and to stand up for what they believe in. And often, even when they don’t call themselves feminists, they have feminist ideas. And in that case, I feel like the label is less important than the actions. Everyone plays their own role in achieving gender equality.”

“Some people might not see what I do as activism. I do, but I agree that it’s not concrete enough yet. I want to work around trans people, non-binary people and genderfluid people… I don’t use the word ‘women’ when I talk about my work because I don’t want to exclude other people with vulvas. I don’t know how to make it more concrete though, I’ll have to think about it. For now, I’ll use it as a way to spread my message and to raise money for causes I believe in.”

Anna shows off her work on Instagram and sells it on Tictail. You can admire her art in Barlok, in Brussels on the 16th of June during a feminist/Riot Grrrl event. 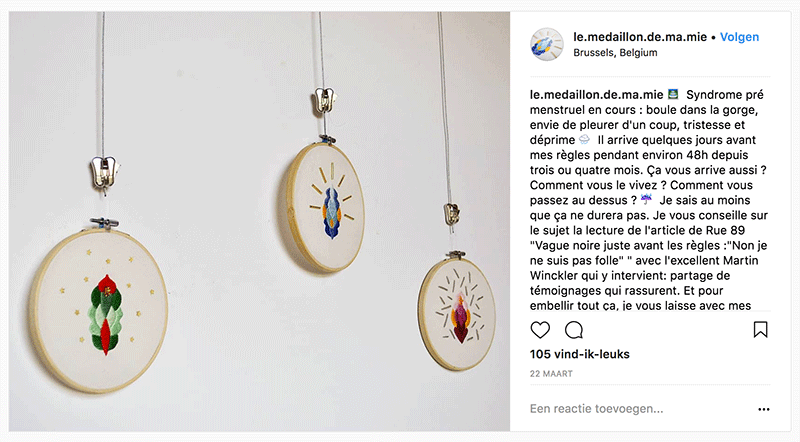